Ktar / Carter: Hey! My name is Carter, I'm a 20 year old dude from California, and I'm the programmer and project lead for Slip 'n Slime, but you probably already knew that much. A bit about my past experience: I've been programming in Java since I was 12, I started doing game development about two years ago, and I've been working on SnS for about a year. I created this project after playing through a game called Tomb of the Mask, seeing advertisements, and creating my own version of it so that I could basically play Tomb of the Mask without advertisements.

Selo / Sergej: Hey there, my name is Sergej Lopatkin and I am a Level Designer from germany and most of the time I create levels for 2D/3D Games. My beginnings started when I was 12 years old and I found out about the RPG-Maker. Since then I was involved in creating different games, levels and other projects, that are a great way for me to express creativity. At some point I got the opportunity to turn my hobby into a profesion and I studied game design at the MD.H in munich and successfully finished in 2018 with the Bachelor of Science Degree.

For Slip'n Slide I work as Game/Level Designer and am responsible for most levels and puzzles. I think it is a great project for me to study different puzzle design and foundational level design

Andreas / Andreas: My name is Andréas. I am a Swedish 2D/3D artist and I'm creating the art for the game. I grew up just south of the arctic circle where the winters are long, cold and dark. It's perfect for staying inside playing games and learning how to create pixel art. I'm a freelancer, working with all kinds of art. I have a bachelor's degree in 3D graphics and have worked full time with game art since 2014. I guess you could call me a graphics nerd enthusiast who spends most of his time creating art and doing his best to always improve. I love it when I can check back on something I made six months ago and see that I could improve it with what I've learned since then. I'm a sucker for great puzzle games and after seeing a video clip of the game I just knew that I had to be a part of the development team. I'm really looking forward to playing the final game and I hope that you will like the graphics.

Now back to Carter.

Cool shit. Now that the introductions are out  of the way, I want to talk a little bit about the beginnings of SnS. I have only been coding games for about two years (with one of those years belonging to SnS), however I've been doing Minecraft mod development since I was a pre-teen. I had always loved creating things but was always too intimidated by video games to really start creating them. However, two years ago I said "fuck it" and sat down, learned unity, and started making things. These are two prototype things that somewhat resemble a game that I had made before getting started on SnS: https://i.imgur.com/28p5wRK.gifv this was a factory-type game where you create outputs, have conveyors that take items to other places, and tiles that turn them into other things. And this https://i.imgur.com/Q9uIBXb.gifv was the game I made directly before starting on SnS. Before SnS, I hadn't ever "finished" any games, I'd always give up and work on something else more interesting to me at the time, but I had enough and I wanted to finish something, so once again I said "fuck it" and decided I'd finally finish a game, and I'd make it damn beautiful.

Well.. I came up with this:

This was the first iteration of Slip 'n Slime, where it was just called "Jump Game", which you can still see remnants of if you look at the code. All this had was walls, air, spikes, and win tiles, the code was simple and nothing too interesting was happening, however I had thought that I was a complete badass, so instead of working on the game, I then went on to spend three-or-so months working on a level editor, which came out to this:

I had created this because I thought that it was necessary. I thought that using existing editors was lame, and that I could make a tile editor better than any tile editor before me (which is a consequence of my personality). I was working many hours a day every day on this editor, because it  was just so much code that had to get done. The sidebar, the main view, the menus, the loading, saving, dragging, grid lines, other sidebar, tab menus, it just went on and on-- and even after three months, it wasn't even close to Tiled (the premiere tilemap editor). After seeing how far behind my editor was from Tiled, and seeing how ugly and un-functional my game was, I decided to stop working on it.

About a month later, I met an artist named Simone. Simone and I started talking, I showed her the gif of (at this time) "Slime Game", she loved it, and graciously started doing art for free, which is the art that was previously implemented in the game, and looked like this: 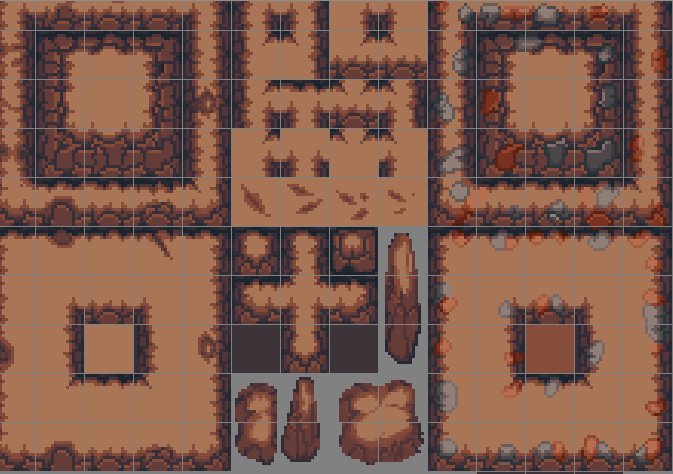 Having another member on the team who was working on something too, and who was making it look beautiful was inspiring. I started working on it, rewriting the movement code, adding new tiles, testing new rendering things, creating dozens of bugs, causing things like this:

For a few months, things were going very smoothly, new art was getting made, thousands of lines of code were being created. Somewhere in the middle of this, Sergej joined the team as the level designer, and now we had great levels being created! Another month or so passed with Sergej and then.... Simone could no longer work with us. She had become far too busy with other (paying) things, and had a shiny new job, and just did not have time any longer. This was devastating.

So I started trying to find other artists working for free, I found some people, but none of them were as good as Simone was.. not even close. Then I tried to find someone who would work for shit pay, found some people, but once again, no one was even close to Simone's level of quality. Then after about two-and-a-half weeks of searching, I decided, as is common in my life "fuck it" and went out to find someone who I could pay industry standard rates hourly for art, thats when I found Andreas after two more weeks of interviewing, trial art, and lots of discord calls. Here are some submissions for proposed styles of the game, can you guess which is Andreas'? https://imgur.com/a/LG7rpaB

And now.. here we are. I hired Andreas, and for the past month or so he's been working on the team helping create great art for my code and for Sergej's levels.

And that's where I'll wrap up this week's devlog. Thank you so much for reading.

P.S.: If you haven't already, I'd love for you to join my discord! https://discord.gg/vNVy8uD