Hey! I noticed lots of people read my devlog that aren’t in Slip ‘n Slime discord. It really means a lot to have people in the discord following updates, as it’s the easiest place to find out about playtesting, announcements, and sneak peaks. If you’re interested in joining, you can at this link: https://discord.gg/vNVy8uD . Anyway, onto the devlog!

Hey there! It’s Carter, back at it again with another Slip ’n Slime devlog! While the first devlog was more history and introduction, this and others in the future are probably going to be about the progress we’ve made. I don’t really have a fixed schedule of when to upload these devlogs, but I’ll make sure to write them as notable things come along. This week, I'll be talking about some new mechanics, and some other interesting things going on.

Let's start with the mechanics: two new game elements that we’re going to test, one of which is to replace the old, rarely used Ghost mechanic. The ghost was an enemy in the game that would oscillate back and forth along either the horizontal or vertical axis. The ghost would kill the player if they touched it. We decided to remove the Ghost because we found that it ultimately played no role in puzzle solving. All it really did was force the player to move within specific intervals-- it just wasn’t interesting or impactful on gameplay. It was just a death trap. And that is all for the Ghost Enemy’s eulogy -- he will be missed (honestly, not really).

You know what is interesting, though? Two brand spankin’ new mechanics! Ba-boom! First up is the Hero, which is what came to replace the Ghost and which is another reason for the Ghost’s removal. So let’s get technical. The hero starts out motionless, facing one of four directions (up/down/left/right, obviously). When the player crosses in front of him (or her, but for brevity, we’ll call it a he for now), he moves forward until he hits an obstacle. If the hero runs into the player, he kills them, similar to the ghost. Here’s a GIF of him in action.

Simple, right? Well, there’s actually a lot more to the hero than that. Firstly, only the front kills the player. The sides and back are perfectly harmless, and colliding with them will stop you as if you hit a wall. He also interacts with any other game object the same way the player would, such as crumbling floors, pressure plates, boxes, etc. I think this mechanic is going to be a good one, and I’m excited to see what Sergej comes up with in the level design, and how the hero evolves over time.

The second mechanic we’re trying out is the minecart. As of now, it acts like a death crate on rails. When you hit it in the right direction, it begins moving along the rails until colliding with something. If the track it is on loops, the minecart will loop infinitely. This one is a lot more basic, and we are still exploring interesting ways to involve it in puzzle solving. Here’s some demo footage.

Now let’s talk bug fixes for the week. This week we’ve fixed not one, not two, but THREE *major* bugs in the game having to do with rendering and scaling. The first bug to be fixed was the stretching of the game after activating the pause menu. The game would look fine and in 16:9 ratio as it should, but after opening the pause menu, it would stretch all the art and fill the screen (in my case a 21:9 monitor). Well, stretch no longer! The second bug to be fixed was the in-game pause menu buttons not working when in a maximized window-- this was caused by the blur/vignette code of the pause menu. I switched to a new framework for post-processing and the bug went bye-bye, awesome! The last bug that got fixed was movement jitters. The best way to describe these jitters is when the player would move it always felt like the camera was running at fps and not the buttery smooth 60fps. It was very subtle, but definitely noticeable, distracting, and annoying. However, this was fixed and everything is smooth as butter now!

The last announcements have to do with miscellaneous improvements / features added. This week has seen the introduction of Steam’s api (steamworks) and the inclusion of other Steam related features like the overlay, community hub, and achievements. Though we’ve yet to add the achievements, the ability to add them is there now. The other major addition this week is controller support. Controllers work in the main menu, pause menu, and in-game. They’re still a work in progress, but they function and can be used to play the game! Controller support will only get better with time as we continue to finalize menus. 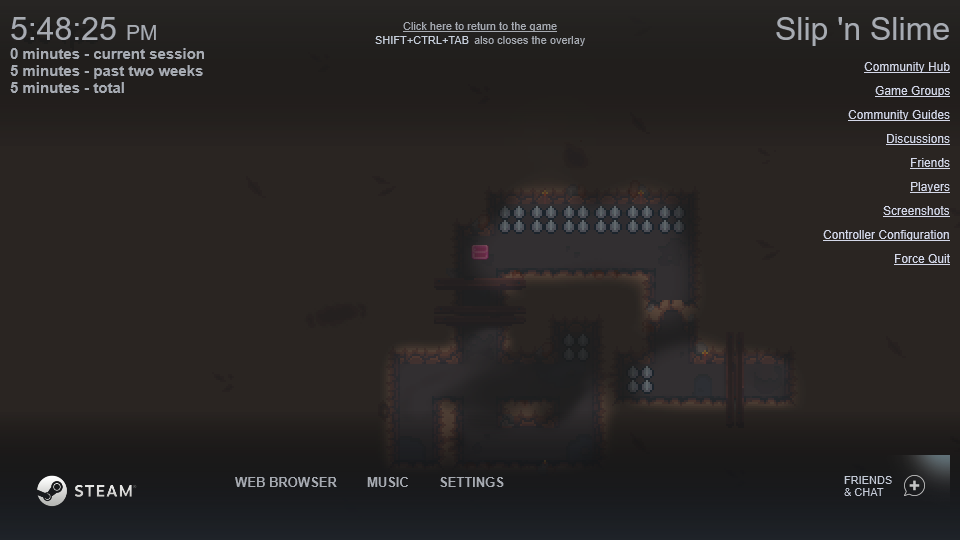 And with that being said, that's all for today! I hope to see you in the Slip 'n Slime Discord server! https://discord.gg/vNVy8uD

~Thanks to my friend Nick for helping me edit this devlog.